Jud Dutrisac, of Goleta Hollister Apartments LLC and Goleta Hollister Triangle LLC, has requested approval of 14 studio and 13 one-bedroom apartments (27 total).  Five of the 14 studio apartments are proposed to be income restricted units for 30 years. The project description and location are provided below. The City has completed an Addendum to the Westar Mixed-Use Village Final Environmental Impact Report and the General Plan Addendum for this Project.

An addendum for the General Plan Amendment (GPA) component was prepared to provide clarification of environmental impacts and to address minor changes associated with the GPA to the General Plan/CLUP Final Environmental Impact Report, 2006 (Westar FEIR). The Westar FEIR and GPA Addendum were certified by the City Council in October of 2012 and the Westar Village Project has been developed with the exception of the1.84-acre site. As part of the approval, the land use and zoning were changed from a residential to a commercial designation.

Following the City approval, a legal challenge was filed by a nearby resident.  The developer and the resident entered into a settlement agreement.  Part of the settlement was the agreement that the developer would not move forward with the commercial development on a section of the site (the 1.84-acre project site).  The developer agreed to apply for a development plan amendment which would change the commercial and live/work component to 33 apartment units. The 33-apartment project was rejected by the City Council in October of 2017.

Since then, the City has entered into a settlement agreement with the developer for a 27-unit apartment project, to replace the entitled project for this site of commercial/retail and live-work buildings. If the 27-unit project is rejected, the developer will be entitled to construct the original commercial project and live-work units approved on the 1.84-acre site.

The Westar Mixed-Use Village Project included a previously approved component consisting of 12,687 square feet of retail space, five live/work residential dwellings, associated parking, and a 0.42-acre open space/park at this location on 1.84 acres within the overall 23.6-acre site. The 1.84 acres (“Project Site”) is comprised of four lots (lots 4, 5, 6, and 10 of Tract 32048). The proposed project (“Revised Project”) includes the following elements:

1. General Plan Amendment (18-152-GPA) to change the General Plan and Land Use Element Figure 2-1, the Land Use Plan Map, from Community Commercial (C-C) back to Residential Medium Density (R-MD);
2. Rezone (18-152-RZ) from Shopping Center (SC) to back to Design Residential 20 units per acre (DR-20), consistent with the proposed General Plan Amendment;
3. Lot Line Adjustment (18-152-LLA) to merge Lots 4, 5, and 6 of Tract Map 32,048 to accommodate the proposed development; and
4. Development Plan Revision (18-152-DPA) for the construction of 27 residential units (apartments) and associated Setback Modifications. 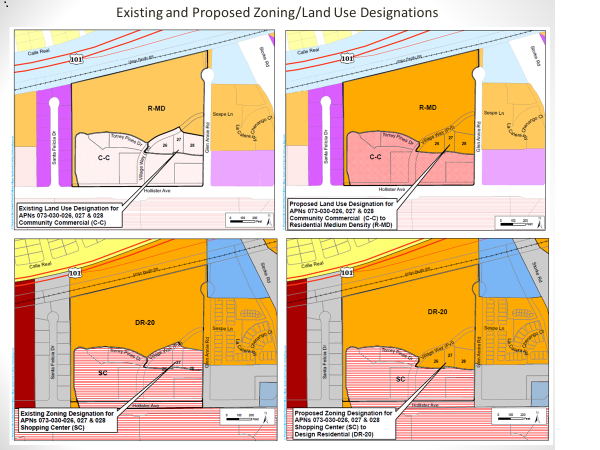 Comments or questions regarding the project and/or review process can be directed to Mary Chang, Supervising Senior Planner, at mchang@cityofgoleta.org or 805-961-7567.