• Expansion on topics such as the Santa Barbara Airport, the electronics/aerospace industries, immigrant communities, and influential local women;
• Expansion of the Native American/archaeological chapter to include stories and reflections from the Barbareno Band of Chumash Indians (BBCI), particularly about people and places;
• Removal of subjective language; and
• Recognition of the City’s adopted Urban Forest Management Plan.

Revisions have been incorporated into the revised document.  In addition, staff and the consultants have worked closely with the Barbareno Band of Chumash Indians and individuals who have interest in the Native American/archaeological portion to augment the Context Statement.

Lastly, on Monday, January 28, 2019 at 6:00 pm, the revised Historic Preservation Context Statement will be presented to the Planning Commission for their input.  A meeting notification will be sent to all subscribers of the Historic Preservation List when the agenda is available for the January 28 meeting.  If you are not subscribed, please sign up here: https://public.govdelivery.com/accounts/CAGOLETA/subscriber/new.

Questions regarding the Revised Context Statement and the overall project can be directed to Current Planning Manager Lisa Prasse at lprasse@cityofgoleta.org or 805-961-7542.

Context Statement Update
The third aspect of the draft Goleta Citywide Historic Context Statement, the Tree and Landscape Study, is available on the project page.  The Tree and Landscape Study was presented to the Public Tree Advisory Commission for comments at their meeting on November 29th.  The video-taped meeting is available here.  The slide presentation and public comment received regarding the Study are also available on the project page.

Context Statement Update
The third aspect of the draft Goleta Citywide Historic  Context Statement, the Tree and Landscape Study, is now available here for public input.  The purpose of the Context Statement is to highlight trends and patterns critical to understanding how development has occurred in Goleta.  The City has chosen its Context Statement to not only be based upon the built resources, but also archaeological/Native American resources and tree and landscape resources as well.

Comments on the Tree and Landscape Study may be submitted in writing to Lisa Prasse, Current Planning Manager, at lprasse@cityofgoleta.org. Please submit comments by Wednesday, December 6, 2017 at 5:30 pm.  This is the same deadline as for comments for the archaeological resource portion of the Context Statement.

The Tree and Landscape Study will be presented to the Public Tree Advisory Commission for comments at their meeting on Wednesday, November 29th, at 5:30 in City Hall Council Chambers.

Context Statement Update
The archaeological resource portion of the draft Goleta Citywide Historic Context Statement is now available for public review here.  A section of the document was prepared by the Cultural Resources Committee of the Barbareno Band of Chumash Indians.  The City of Goleta has significant archaeological resources within its borders and intends to manage those resources in a responsible and sensitive manner.  The archaeological resource portion presents the history of Goleta from prehistory to the middle of the American Period and identifies important periods, events, themes, and patterns of development.

The historic tree portion of the Goleta Citywide Historic Context Statement will also be released soon.

Workshop #3
Workshop #3 will begin on Wednesday November 15, 2017 at 6 pm in Goleta Council Chambers located at 130 Cremona Drive, Suite B.  The purpose is to get community input on the archaeological resource portion and follow up on last month’s workshop.  Comments may be submitted in writing to Lisa Prasse, Current Planning Manager, at lprasse@cityofgoleta.org. The deadline to submit comments on the archaeological resource portion is 5:30 p.m. on Wednesday, December 6, 2017.

Workshop #2 Update
Lastly, the meeting notes and PowerPoint presentation for Workshop #2 are available for review:

Since completing the reconnaissance survey, the Historic Resources Group project team has been hard at work compiling data and conducting research on the history of Goleta. Based on information gathered to date, they are working on the first draft of the historic context statement, and preparing for additional field work which will begin at the end of February 2017.

During the course of their research, they have come across several interesting facts about Goleta’s history, including:

On December 7, 2016, the City held its first workshop in a series on the Historic Preservation Project. Click here to see the PowerPoint presentation explaining the project and providing next steps. At the workshop, attendees were separated into break out groups where they identified built resources they thought should be looked at through the Historic Preservation process. These places were then added to a map - click here to see it. Please note, this map does not include comments regarding archaeological resources.

Be sure to sign up at http://tinyurl.com/goletasubscriptions to receive updates and notifications about future workshops.

Goleta Through the Years
Travel through time to see Goleta's development decade by decade.
See how the City has been developed via subdivisions, or tracts, over time. 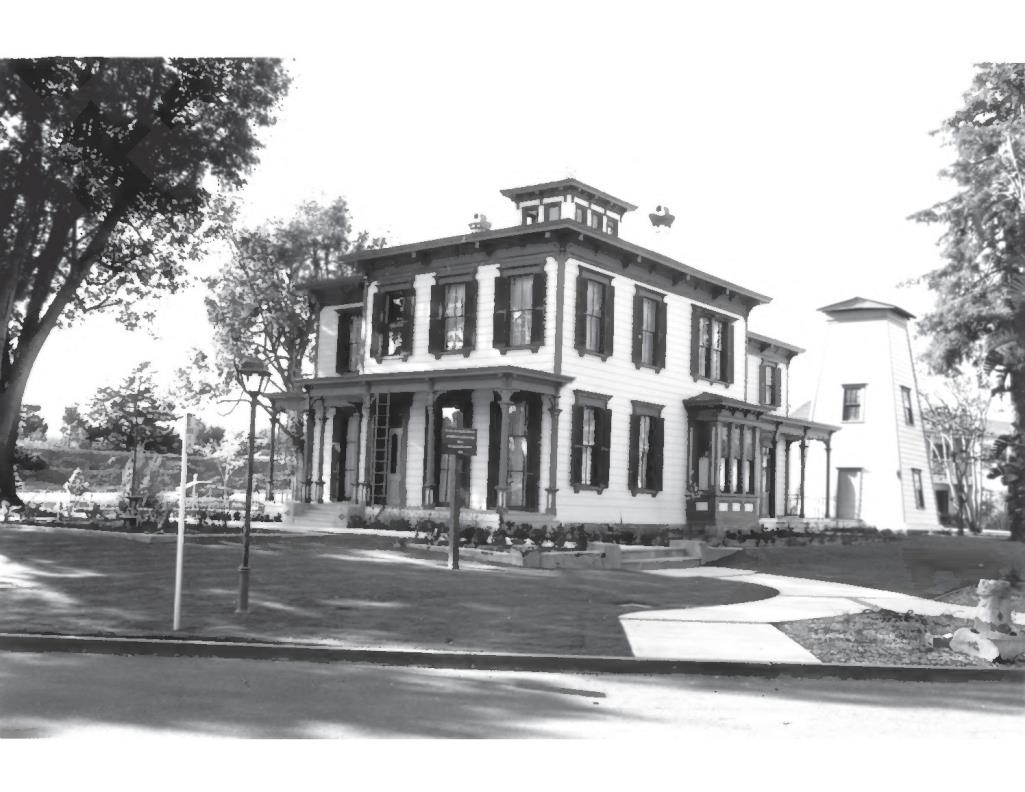 Located on Hollister Avenue, the Joseph and Lucy Foster Sexton House (1880, Peter Barber; SBCL #14; listed in the National Register of Historic Places) is significant for its association with Joseph Sexton, a pioneer nurseryman and a key figure in the agricultural development of the Goleta Valley. It is also significant for its Italianate style design by Peter Barber, a prominent 19th-century Santa Barbara architect. The house and its associated features are the only extant structures associated directly with Joseph Sexton and his career as a horticulturist. Sexton earned a reputation as a pioneer horticulturist, and influenced the transformation of southern California's vast cattle ranches into commercial farms and its dusty, semi-arid villages into well-ordered American communities with shaded streets and ornamental gardens. He was an experimenter, and the Sexton Nursery was as much a laboratory for developing stock suited to the southern California environment as it was a supply station. 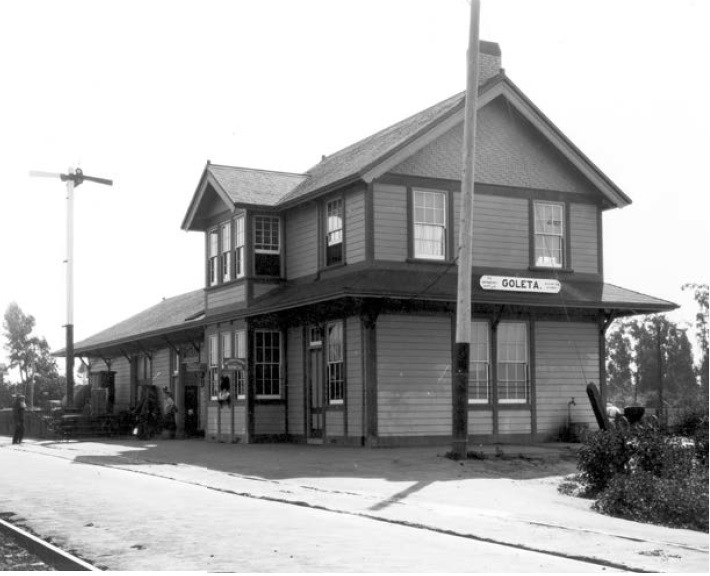 Goleta Depot (1901; SBCL #22; listed in the National Register of Historic Places) was built during the completion of Southern Pacific's Coast Line. This coastal route, linking the principal California cities of San Francisco and Los Angeles, came to have a major impact on patterns of settlement, tourism, agriculture, and other forms of social and economic development throughout most of the 20th century. Scores of depots and lesser buildings were erected in the county during these final years of the Coast Line construction. While other original structures and features (e.g., bridges, cuts and fills) endure, Goleta Depot is the only surviving railroad building from that period.

Located beside what was once a vast oil field, the Barnsdall-Rio Grande Gasoline Station (1929, Morgan, Walls & Clement; SBCL #29) was the product of a 1928 oil strike, which quickly made the Barnsdall-Rio Grande oil company a major player on the New York Stock Exchange. Almost overnight, they were Goleta’s biggest taxpayer. At one time, Ellwood was the most productive oil field in the world, yielding more than 100 million barrels of oil in over 3 decades. Most filling stations at the time were boxlike structures with little ornamentation. However, when the Barnsdall-Rio Grande decided to build a filling station on the State Highway adjacent to their oil fields, they wanted it to be a showpiece.