Project Update #2 - February 2017
Since completing the reconnaissance survey, the Historic Resources Group project team has been hard at work compiling data and conducting research on the history of Goleta. Based on information gathered to date, they are working on the first draft of the historic context statement, and preparing for additional field work which will begin at the end of February 2017.

During the course of our research, they have come across several interesting facts about Goleta’s history. Here are some of their findings:

The Development of Two Towns 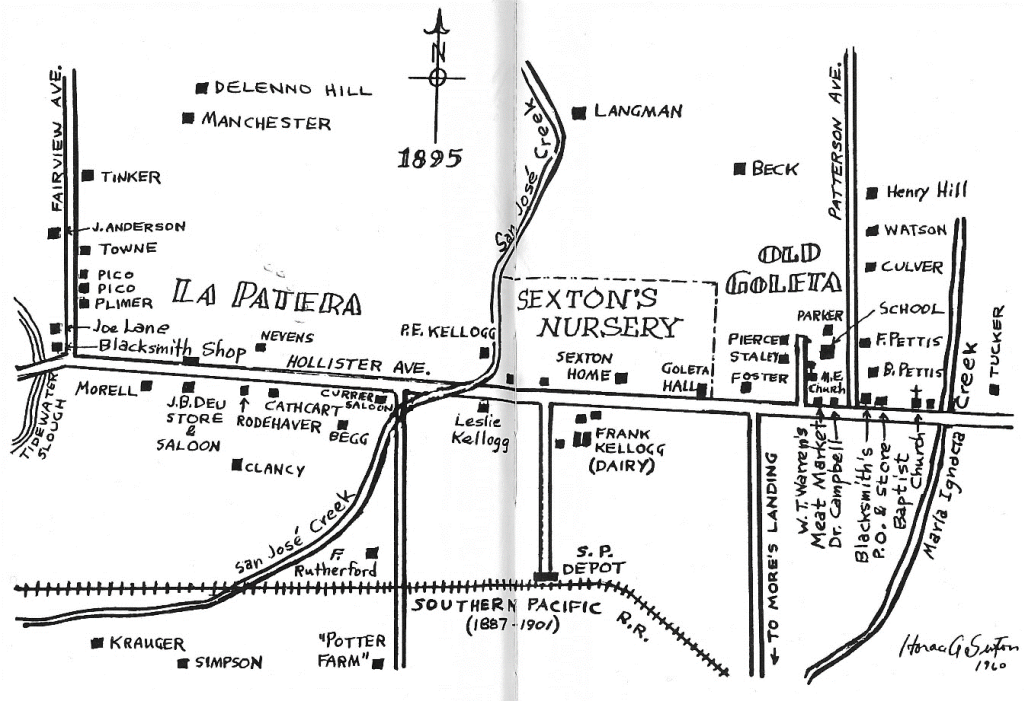 Map of Goleta and La Patera, 1895. Drawn by Horace Sexton, 1960. Source: Walker A. Tompkins and Horace A. Sexton, Fourteen at the Table: An Informal History of the Life and Good Times of the Sexton Family of Old Goleta (Goleta, California: Goleta Valley Historical Society and Institute for American Research, 1983).

During the 1870s, the character of the Goleta area began to shift from sparsely populated cattle ranches to farmsteads and towns. The new farmers required goods and services such as farm machinery, wagons and buggies, blacksmithing, and general supplies. To serve their needs, two towns grew up along the County Road (present-day Hollister Avenue).

La Patera, named for the gathering of ducks in the adjacent marshy slough, was located at the corner of Fairview and Hollister Avenues, and was established in 1869 with the opening of Hiram Hill’s blacksmith shop. Jean Marie Birabent’s hotel and saloon followed, as well as a store and saloon run by Jean Baptiste Deu. St. Raphael’s Catholic Church was built in La Patera in 1890.

La Goleta, located on the north side of Hollister Avenue at Patterson Avenue, was situated on the southwestern portion of the La Goleta land grant. It, too, was founded in 1869, with the establishment of a general store by I. G. Foster. Benjamin Pettit’s blacksmith shop followed in 1872, along with Rafaela School, Methodist and Baptist churches, and a post office. The post office, situated in Foster’s store (which also served as the town dance hall), was the focal point of La Goleta.

The Sexton family established Sexton Hall in the 1890s, which served as the center of Goleta social life for several decades. Elections, weddings, funerals, dances, graduations, parties, and lodge meetings were held there. The first movie was shown at Sexton Hall in 1897, and two years later, cartoonist, vaudeville comedian, and actor Leo Carrillo is rumored to have made his theatrical debut in the hall. 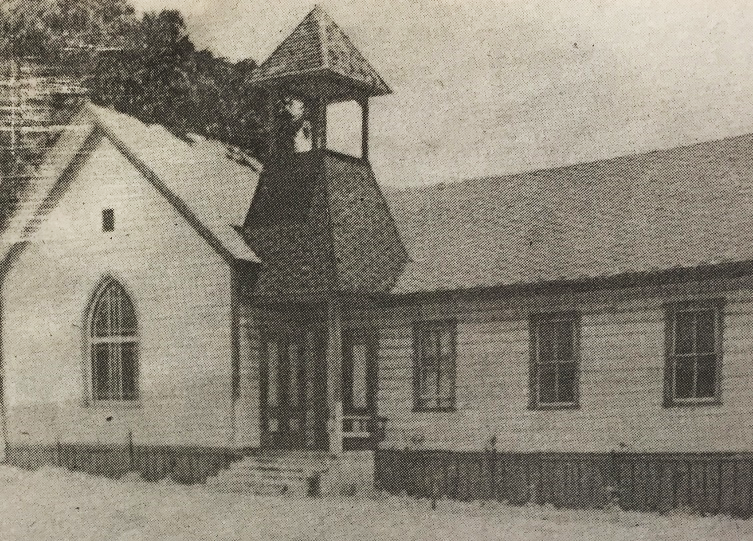 On August 12, 1912, the Protestants of Goleta Valley organized into the “United Church” with 85 charter members. However, because the Methodist Conference would not allow their church to become independent, nearly sixty of the members reorganized into “The Federated Church” on September 22, 1913. The Federated Church purchased property at the corner of Hollister Avenue and Chapel Street to build their church; meanwhile, they met at Sexton Hall. After worshipping in Sexton Hall for less than eight months, the Federated Church congregation moved into their new church (5320 Hollister Avenue; demolished) on May 10, 1914. 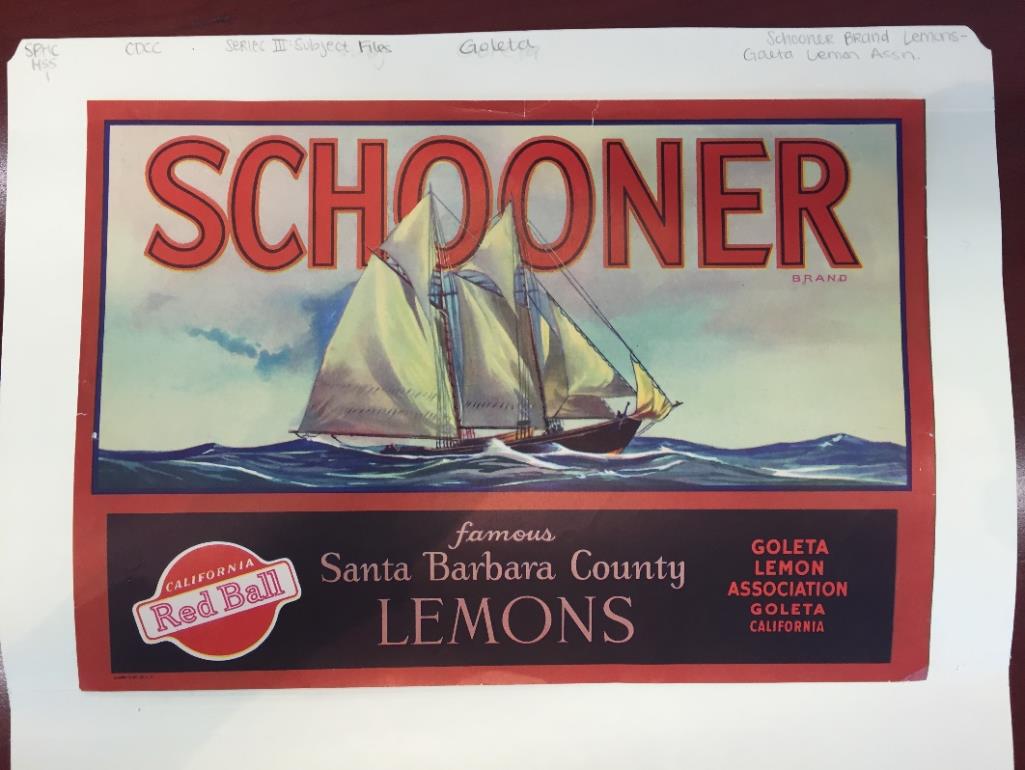 Agriculture in the Goleta Valley transformed during the Great Depression. In the 1930s, a fungus began destroying Goleta’s walnut trees, prompting an upsurge in the acreage devoted to lemons in the Goleta Valley. The reduction in acreage devoted to walnuts also led to a decline in lima bean farming. Although the national economy took a major hit during the Great Depression, lemons continued to command high prices.

The expansion of lemon production created a need for a packing and shipping facility to serve local growers. In response, sixty growers representing 600 acres of lemon groves formed the Goleta Lemon Association in 1935, with a lemon packing plant built the following year on La Patera Lane. The all-wood structure, designed by William W. Ache, spanned 80,000 square feet, and included a 120 x 300 foot washing and packing section, and a two-story, 120 feet by 154 feet storage portion. The storage rooms were insulated with thick redwood planks, while the exterior of the building was painted with aluminum paint to increase solar reflectivity.  During its first six months of operation, the Goleta Lemon Association shipped 306 carloads of lemons across the United States. 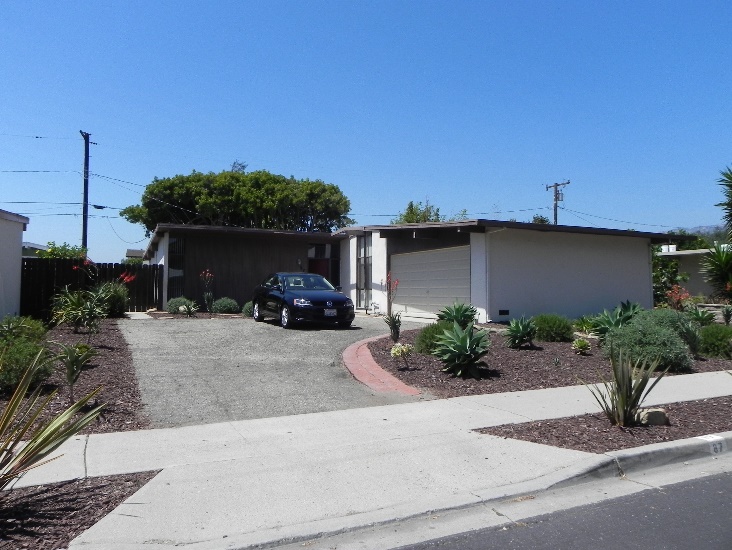 In 1955, the Kellogg Park Subdivision, was created by the Goleta Development Corporation (owned by Garfield Sorensen and Ralph Beckman).  It was the first post-World War II subdivision in Goleta, prompted by the sudden influx of aerospace workers to the area. Construction of the 118-home tract, roughly bounded by the railroad on the north, Mallard Avenue on the west, Hollister Avenue on the south, and Kinman Avenue on the east, began in November 1956, and was completed in 1957. The Mid-century Modern style homes, designed by Los Angeles-based master architects Jones & Emmons, featured three bedrooms and one-and-one-half bathrooms. Built-in ranges, ovens, and fireplaces were optional. The homes were situated on approximately 6,500 square foot lots, and ranged in price from $13,300 to $16,200. Neighborhood shopping facilities were provided at the intersection of the tract’s main street, Kinman Avenue, with Hollister Avenue.