The most recent COVID-19 information is available at www.cityofgoleta.org/covid-19, and at the Santa Barbara County Public Health Department Public Information Portal: https://publichealthsbc.org/.

Click here to have Recreation Updates delivered to you via email or text.

The City has plans to upgrade the playground equipment at six neighborhood parks in two phases: Berkeley, Andamar, Winchester I & II, followed by San Miguel and Santa Barbara Shores.

In 2015, the City of Goleta completed a Recreation Needs Assessment (RNA) which was a comprehensive report that addressed both current recreation resources and offerings, as well as, projected community needs.  This assessment provided a roadmap to guide future recreation planning efforts.  This report also provided the City with an inventory and gap analysis on parks and facilities.

In December 2016, an overview of improvements in five of the parks that were identified in the Recreation Needs Assessment (RNA) was provided to the Parks and Recreation Commission.  In February 2017, an update was presented to the Commission identifying a sixth playground.

However, after further evaluation, two of the six sites require more extensive engineering and evaluation work--San Miguel Park and Santa Barbara Shores Park. Evaluations will continue at these two sites and the remaining four sites will move forward.

All the identified parks will not only receive new equipment, but will also have an accessible path leading from the sidewalk to the playground, and new playground safety surfacing. Council approved a unitary surfacing material to be used for all new and renovated playgrounds at the April 3, 2018, City Council meeting. View the full staff report and presentation here.

In this first round of park improvements, four neighborhoods parks will be addressed – Berkeley, Andamar, Winchester I & ll. In order to gage what residents would like to see in their local parks, the City conducted two neighborhood outreach events in May 2017, to gather input from residents. In August 2017, the City also released a survey in English and Spanish to gather resident feedback. The Park Improvement survey and results are available here.

Based on resident feedback, an RFP went out to playground vendors. Six vendors submitted two designs for each of the four parks. The six vendors were narrowed down to three and interviewed at City Hall on October 10, 2018, by the selection committee. The selection committee were impressed with all three vendors that presented, but had an overwhelming desire to work with one vendor on these projects. After checking references, the selected Vendor is Sun Country Systems as the local representative for Play & Park Structures.

The designs provided by the selected vendor have been adjusted to accommodate the space in each of the parks.  The proposed designs are provided below.  On Tuesday, December 4, 2018 the City Council is being asked to consider a purchasing agreement for the equipment only, not installation or surfacing.  Staff is currently working on construction bid documents for these locations and is working towards a bid release for Council consideration on or about January 15, 2019.  Ordering the equipment for all four locations now, and bidding the construction, installation and surfacing later is the most cost-effective approach for this project.  This will allow staff to maximize resources on the equipment and complete all four playground renovations, to be enjoyed by Goleta residents, in the Spring 2019.

The existing equipment including the swings and slide will be replaced with swings, play structure that includes climbing, monkey bars and sliding for both toddlers and school age children as well as a merry-go-round, benches and shade. The area will be expanded to accommodate the additional equipment from 64’ x 40’ to 83.5’ x 62’. 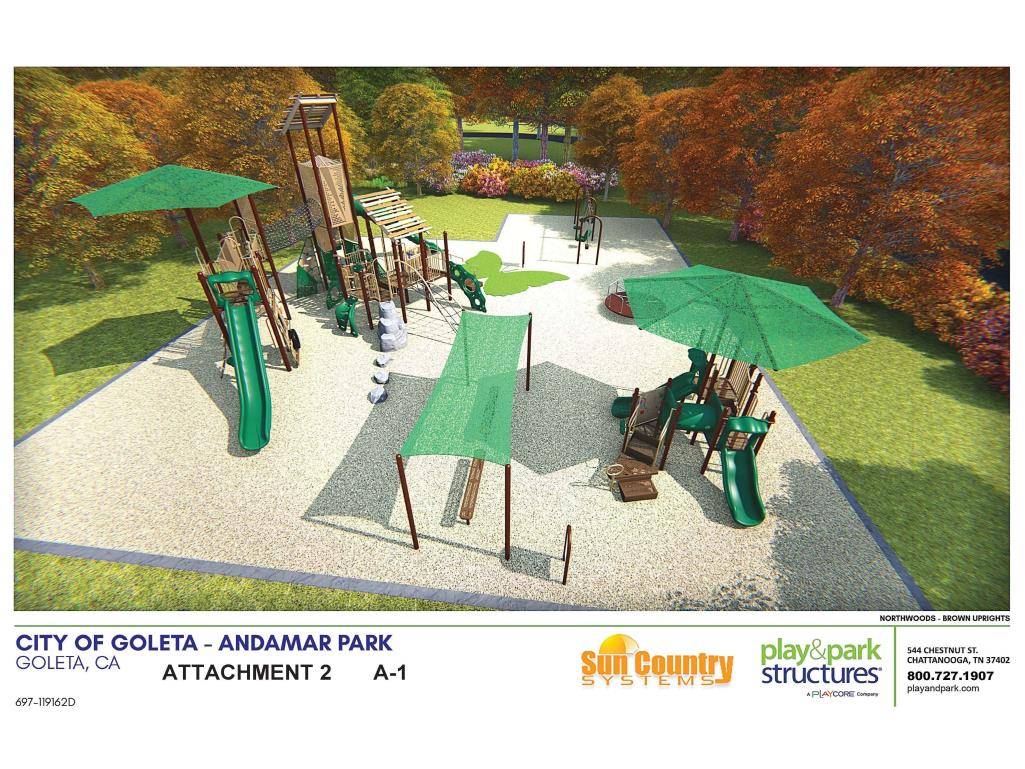 Initially it was determined that the existing toddler equipment would not be removed, but rather, improvements were focused on replacing the swings with a climbing apparatus at a minimum.  After further evaluation, staff confirmed that the lifespan of the new surfacing will exceed the lifespan of the current toddler equipment.  As such, by changing out the existing equipment now, new equipment and surfacing would be installed that would provide the highest amount of longevity and use to park visitors.  The toddler area will have one dual bouncer and a climbing feature.  The other space will have a climbing apparatus designed for children 5 – 12 years old and this space will be expanded from 35’ x 30’ to 35’ x 36’. 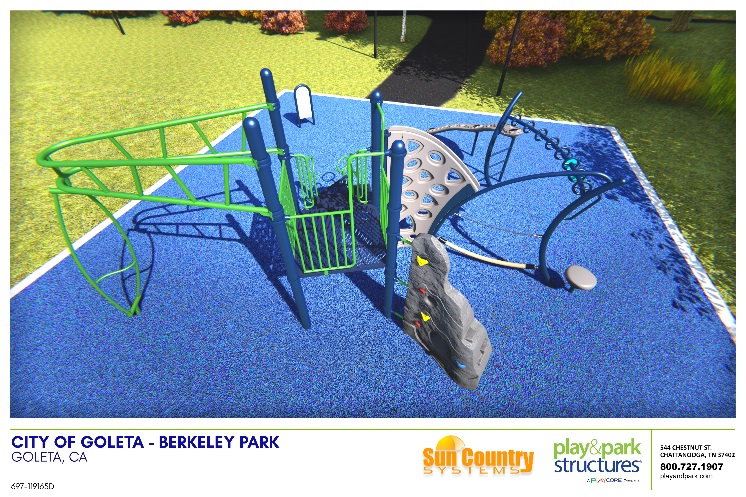 The current play area needed to be relocated closer to the street to allow for disabled access while maintaining a relatively large green space.  While 51% of the survey respondents requested structures for both age groups, the existing space does not allow for it.  The options for this space are limited due to the grade of the area.  The current swings will be removed as they do not comply with current safety standards. Instead of play equipment at this location, fitness equipment has been chosen to accommodate the space restrictions and to offer this recreational opportunity to residents in this area of Goleta.

Four different features will be installed along the north east side of the park to allow for maximum green space and to allow for ADA accessibility without excessive grading and/or the installation of a retaining wall. 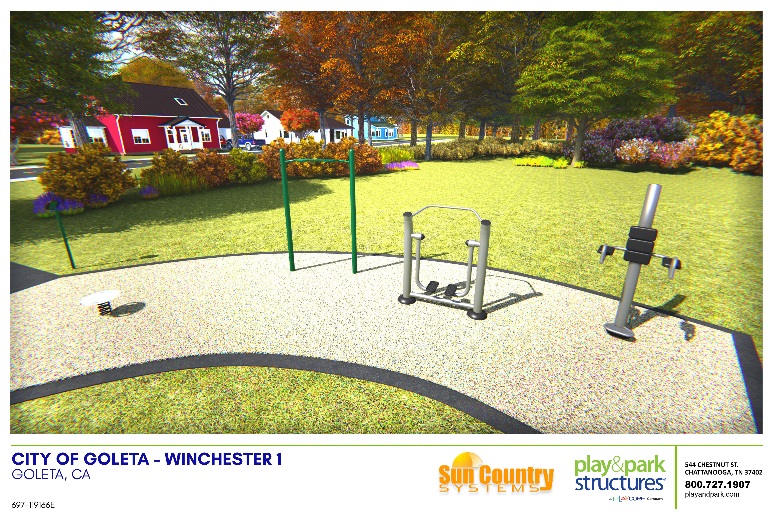 This park had the largest percentage of respondents to the survey of 83% of those that live immediately in the neighborhood.  This location will utilize the current play area with expansion to include climbers and swings for both age groups.  While there are many trees in this park, the improvements will include seating and shade for users and spectators. The expansion will still allow for t-ball baseball activities and soccer fields for children ages eight and under, not requiring additional adjustments to the remaining park space.  The expansion at this site will increase the play opportunity from 38’ x 31‘ to approximately 38’ x 110’. 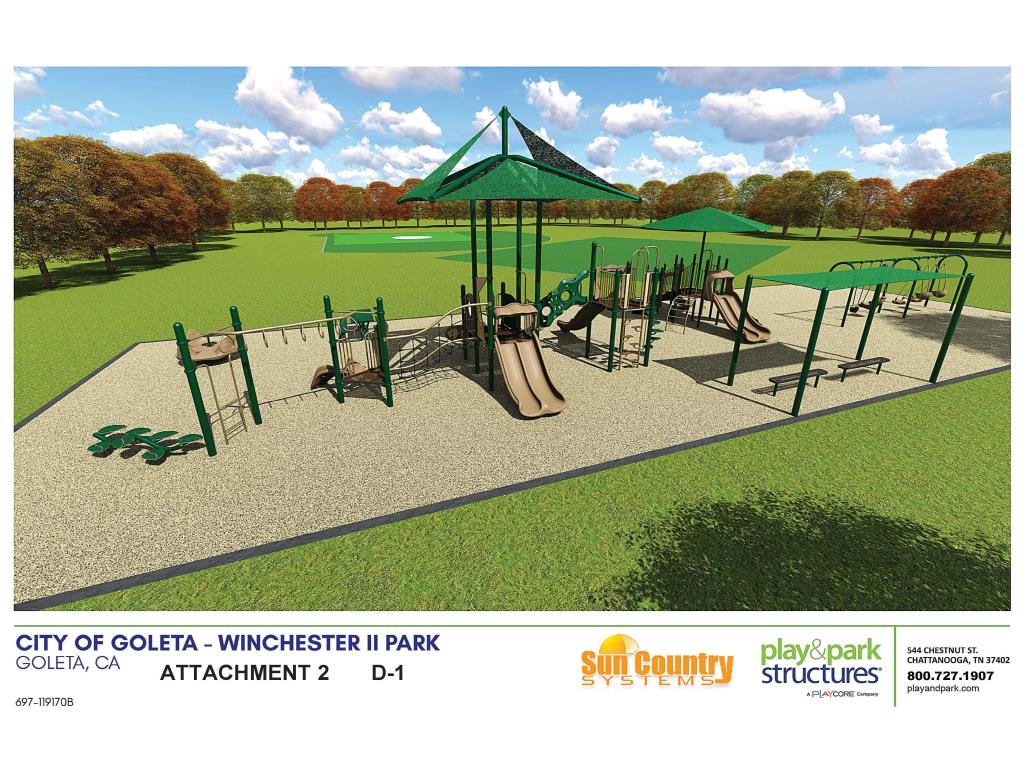 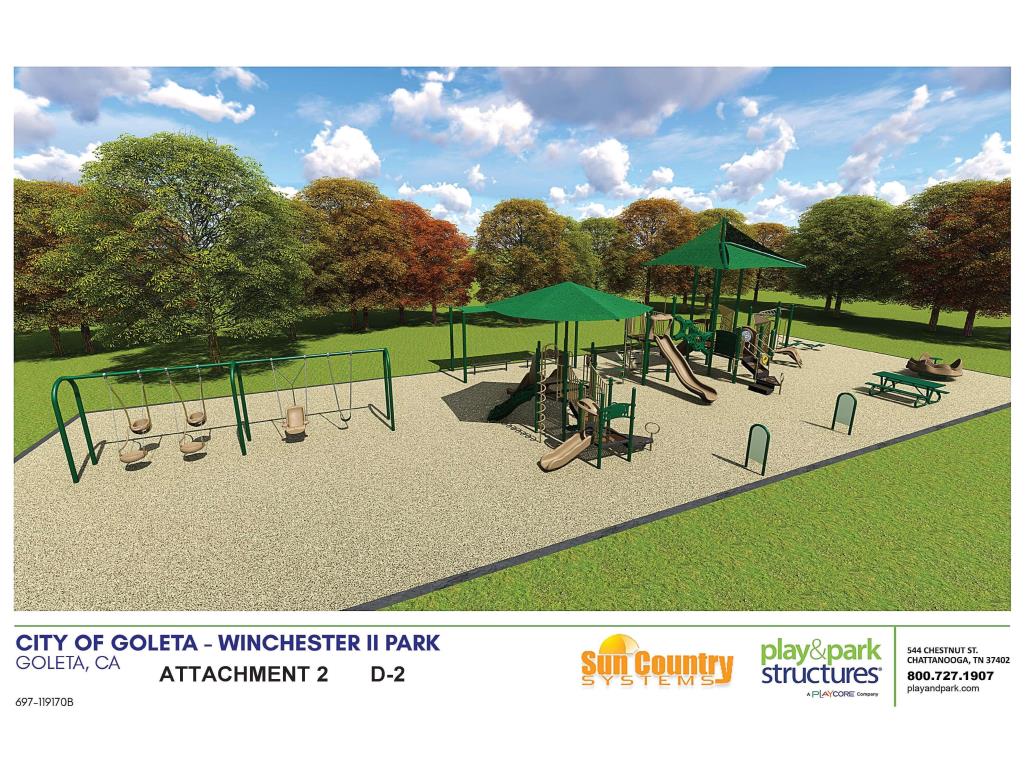